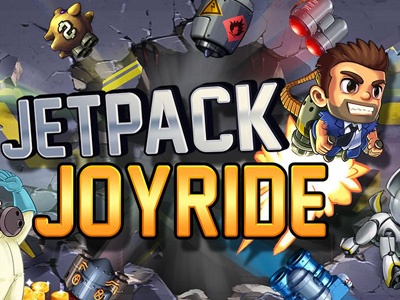 Move over, Mario. Sayonara, Sonic. There’s a new hero in town, and his name is Steakfries. Barry Steakfries. This struggling gramophone salesman may not jump real high, and he certainly can’t run very fast, but he’s got a couple of things that all the heroes want: a jetpack, and the reckless abandon to use it!

Jetpack Joyride zoomed its way into our lives way back in 2011, making it one of the oldest mobile games ever released. But it was such an instant hit, and such a beloved classic, that it’s still flying high in the charts to this day. From its initial debut on iOS, it eventually made its way to Android, Windows, Blackberry, PlayStation Portable, PlayStation Vita, and even the PS3 and PS4.

Such a successful game released during the wild wild west days of mobile gaming could have been a fluke, but seeing as this title came from Halfbrick Studios–the same developers behind Fruit Ninja–it makes perfect sense that such a capable team could make lightning strike twice.

As one of the very first endless runner games to not get swept under the tidal wave of junk titles, Jetpack Joyride is deceptively simple. Our protagonist, Barry Steakfries (who wins the award for most delicious name ever), automatically makes his way towards the right side of the screen. All the player has to do is tap the screen or button on their device or controller to make Barry engage the thrusters on his jetpack. Holding down a tap for an extended period makes Barry rise higher. Short, rapid taps in quick succession can keep Barry hovering at a fixed height. As far as controls go, that’s all there is to it!

But of course, there’s more to the game than just flying. No, you have to fly… with style. Players will have to guide Mr. Steakfries through a never-ending gauntlet of obstacles: lasers, missiles, electric fields, and more. Touching any of these even once ends the run unless you have spare lives to keep ongoing. Additionally, along the way, there are many types of pickups to gather: from the mundane gold coin to the super special vehicle pickups.

To what purpose, you might ask? Well, if the sheer joy of riding a jetpack through a totally legitimate facility without a care in the world is not in itself a reason for you, perhaps the game’s missions are. At any given time in the game, the player is provided with three simple objectives. They come from a randomized pool of activities that include high-fiving a certain number of scientists, refraining from picking up coins for a certain distance, or having dangerously near-misses with obstacles. These missions, when completed, add to the player’s Experience bar and provide a reward of coins upon level up.

As the game’s only currency, coins are essential in Jetpack Joyride. They can be used to purchase and upgrade vehicles and gadgets, expand Barry’s wardrobe with new clothing, and even unlock exciting new jetpacks to take on the titular joyrides. There are numerous ways to earn coins in the game without paying for them: as pickups during normal gameplay; as rewards from the Final Spin, Daily S.A.M. Challenge, and Leveling Up; and by cashing in Spin Tokens at the end of a run.

The Halfbrick devs aren’t anything if not nostalgic, and their game is full of Easter eggs and references to popular media. Keep your eyes open and you may spy a certain gullwing-doored, four-wheeled time machine that will have you shouting “Great Scott!” upon reaching 88mph.