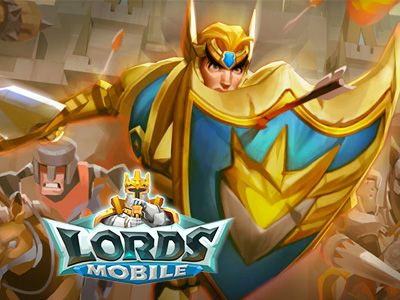 Heroes, to arms! The emperor has fallen, and now the realm is in need of a true Lord to rise up and unite the Kingdoms. Do you possess the strategic mind, the valiant heart, and the rousing charisma needed to fulfill this role? Put it all to the test in Lords Mobile: Kingdom Wars!

Developed by IGG–the creators of Castle Clash and Brave Trials, to name a few–Lords Mobile is backed by a team that is no stranger to strategy games. And yes, this is a true 3D real-time strategy game, even though Lords Mobile offers a simplified presentation that hides a deep and rich system. As a massively-multiplayer online game with slight roleplaying game elements, there are plenty of ways to build and develop your kingdom and army as well as the opportunity to pit yourself up against other real players for the ultimate challenge.

As a Lord, players will brave the chaotic and divided world alongside their army. They can recruit powerful heroes to lead these armies and bring unique abilities and skills into battle. These heroes and armies can be upgraded, trained, and even equipped with armor and weapons ranging the full gamut from mundane to magical.

Without a base of operations, however, an army is nothing but a horde. Lords must also manage the needs of their home kingdom by building necessary structures and upgrading them to unlock new abilities and units. Keep in mind, though: just as you can march your armies against enemy kingdoms, so can your walls be breached. Thus, preparing appropriate defense systems is just as important as building your army.

Once you are comfortable with your level of research, upgrades, and training, you will become a Lord well set on their goals of complete domination. Large-scale siege wars are the highlight of this game, where armies face each other on an open field until one side rallies and the other routes. While definitely a spectacle to behold, there are also smaller-scale, RPG-like hero battles where Lords directly command their heroes as they fight their way through dungeons and unleash their awesome skills to delve for new equipment and hone their skills.

Well, my Lord? Are you ready for a real fight?

Total domination is the name of the game! Whether going at it alone or as part of a clan of like-minded warriors, you play the role of a Lord seeking to prove their worth as the kingdom’s next Emperor. Take your army and slay monsters across the map, or scout out and raid other players to claim their resources for yourself.

Nowhere is safe with global PvP always enabled. Fight your way towards the center of the kingdom against the millions of others vying for the throne. It’s no easy task, so join a guild of trusted allies and rise up against your foes as a group, capturing resources and establishing bases across the realm as a team to earn special rewards.

Train and outfit your Heroes with Hero Battles, a game mode that involves RPG-style battles against bosses, utilizing targeted skills to secure victory and claim treasures. Or use the resources you collect during raids to craft your own powerful equipment. Weapons and armor worn by Heroes benefit them both during Hero Battles as well as in army vs. army wars.