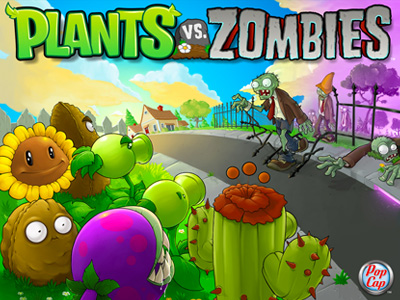 As the song goes, “We don’t want zombies on our lawn!” Plants vs. Zombies FREE is one of the most recognizable names in gaming, regardless of whether you’re a hardcore or casual gamer. If you haven’t been living under a rock for the past decade, chances are you’ve seen spinoffs, memes, or references to Plants vs. Zombies, if not the game itself. Though often referred to as a strategy game, it technically brought the Tower Defense genre to the mainstream. Prior to Plants vs. Zombies, most Tower Defense games were simple Flash games played on browsers or as modified game modes on existing strategy games.

A huge part of the game’s charm is its ridiculous premise. Planting flowers that are over the top in their cuteness while also devastatingly effective against the walking dead is about as out there as it gets when it comes to game concepts. It’s definitely got an adorable appeal that can draw in even the most casual gamers, but you’d be surprised by its depth. In fact, lead director George Fan wanted to make a game that could still entertain more advanced gamers as well. Drawing inspiration from titles such as WarCraft III, Magic: The Gathering, and his own previous games, it’s safe to say Fan succeeded here.

If for whatever reason you don’t know anything about this game yet, here’s the gist. In Plants vs. Zombies, you play as a simple homeowner in the middle of a stereotypical zombie apocalypse. In order to keep your precious home safe from the invading zombies–some of which are more dangerous than others–the player plants seeds that grow into friendly plants which are capable of defending their land. They do this by either shooting the zombies with an array of projectiles or by causing some other detrimental effect on the horde. Some plants can provide passive benefits to the player or the surrounding plants as well.

The primary resource used in the game is “sun” power with which defending plants can be bought. As is expected, one source of this “sun” power is the mighty sunflower, whose drops can power an entire infantry of plants. The plants purchased with this resource can be placed to block the approaching zombies, who advance toward the house along several lanes on the house’s lawn. If a single zombie makes it to the end of any lane and reaches the house, the level ends in a loss.

An adorable cast of not only pretty plants but zany zombies awaits you! Instantly loveable plants like the Peashooter, the Wall-nut, and the Cabbage-pult will remove any doubt you may still have about this game’s flower power. And characters like the Football Zombie, Conehead Zombie, and Screen Door Zombie are so devilishly charming, you’ll be hard-pressed hating on them despite their desire to feast on your brains.

Though the game looks cute, it does ramp up to require some serious strategy. There are over 50 levels with different lawn layouts to plan around, and dozens of different zombie types–each with their own unique challenges players must adapt to. Once you’ve mastered the campaign, you might want to try your hand at the endless survival mode. How long can you last against the relentless zombies?