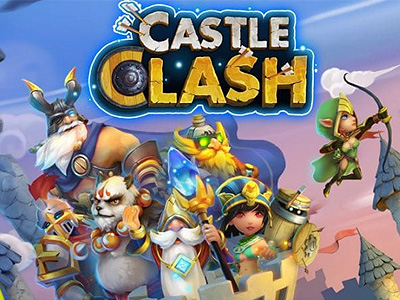 The dust settles across the field of battle. The stage is set, and the final duel begins. Which hero will emerge victorious? Only a superior strategy will win in Castle Clash: Guild Royale!

Castle Clash celebrates its 7th anniversary! With the usual libations comes an increased roster of Epic Heroes ready to join your lineups. Take it all in–the rush of battle, the thrill of competition, and the deliciously sweet birthday cake–as you play to earn unique prizes. Because with IGG, this is more than just an anniversary for Castle Clash; it’s a celebration of the time all its fans have spent with them. Success wouldn’t have been possible without the players who love the game, so thank you for the last 7 years–and here’s to many more to come!

Filled to the brim with muscle-flexing combat and fast-paced strategy, Castle Clash is a game for anyone who fancies themselves a master strategist! This app of epic proportions will have players managing multiple fronts: hire legendary Heroes to lead your ever-growing army of mythical creatures and awesome adventurers; design cunningly complex bases that will leave no opening for your foes to exploit without suffering major losses; fight your way to the top, and rightfully claim the title of the world’s greatest warlord!

Will your strategies stand up to the test of dungeons, raids, and more? Will your guildmates answer your call to arms and follow their fearless leader? The battle never ends, because with over 100 million players worldwide playing Castle Clash, it’s always time to fight!

Guild Royale is where you can strive for glory! Summon the up to four other guildmates and compete to reign above all other guilds in the all-new “Narcia: War Era” seasonal game mode. This special mode focuses on team-based strategy, so be sure to communicate and practice with the rest of your guild; there’s no room for lone stars here!

Take the co-operation to an even larger scale with the server-wide boss! The Archdemon and his forces are invading the land, and it’s up to every Castle Clash player to put up a united front against the hordes. This raid boss event requires every man, woman, and child to pitch in and help deal damage, and the top damage-dealers will be rewarded greatly!

Got a score to settle? Duke it out in the Arena! You can go head to head against another player for a true 1-v-1 duel. No excuses here; only the most tactically sound strategists will win and be crowned the ultimate Arena champion.

Character customization makes its way to Castle Clash! You can give the Heroes you hire intimidating new appearances by equipping them with enhanced Hero Skins. Unlocking equipment for your Heroes to wield in battle will boost their stats and abilities. You can even raise adorable Pets to become fearsome battle companions!